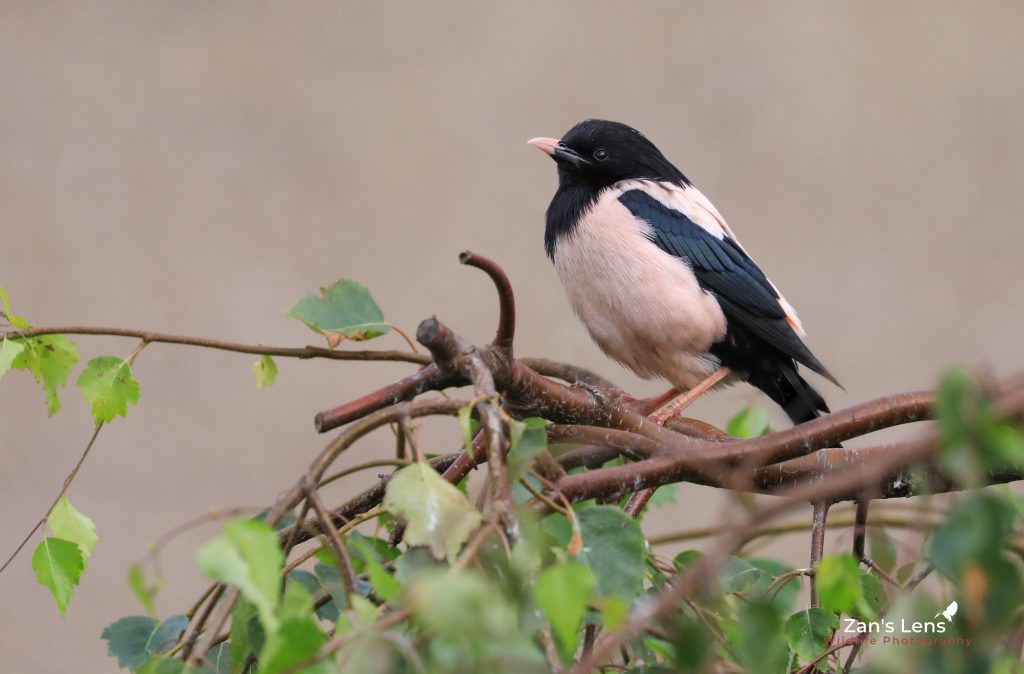 DURING lockdown, I was trying to make the most of my free time – going on daily walks, working on my website, editing photos from before lockdown, designing my first book and completing A LOT of jigsaws (I am sure you will not be surprised that all of the jigsaws had something in common – a wildlife theme!).

After the lockdown restrictions started to ease, I was able to spend even more time outdoors than I would normally do. I dedicated June to visiting different local sites to watch the kingfisher – which you may remember from my previous article – a family of wrens and the brown hares.

One evening, as I was uploading my photographs on to social media and searching through the pages, I came across a few images of a bird that every birder wanted to see since its influx to the UK was published. It was a rosy starling!

The beautiful rosy starling (also known as the rose-coloured starling or rose-coloured pastor) looks nothing like the starlings we know. It strongly resembles a magpie (if only a pink magpie existed!) with a much shorter tail.

This species is unmistakable in its adult plumage. The male has a pale pink body with a black head, wings, and tail. Additionally, during the breeding season the male develops a wispy crest and the black colour becomes glossier with a purplish green or blue sheen.

The female is less vibrant than the male. Both sexes appear much duller outside of their breeding season. Furthermore, the rosy starling does not mimic other species, unlike its well-known cousin. What the two species have in common is murmuration – an astonishing and mesmerising aerial spectacle; large flocks of these birds gather and perform a real show as they swoop, dive and swirl across the sky in beautiful shape-shifting clouds. It is a phenomenon that pleases the eye of every observer.

The rosy starling’s breeding area stretches from the Balkans and Turkey to Central Asia and north-west China. It spends winters in India and south-east Arabia. As a strongly migratory species, it can travel outside of its normal breeding range. As a result, there are significant periodic summer and autumn influxes in western Europe. The causes of such irruptions are not yet fully understood; however, it appears to be related to changes in the population of locusts on which the birds feed.

Imagine my amazement when I read that one of those birds had landed and made its temporary home in someone’s garden in Port Seton! The cherry on the cake was that the night when I saw the first images of the rosy starling in East Lothian, I also received an email from Stuart Payne – the lucky host of the rosy starling. Stuart invited me to his garden.

The next morning, my fiancé Chris and I rushed to Port Seton. As we were walking towards Stuart’s house, we saw another birder looking around hoping to spot the rosy starling. As soon as we arrived at Stuart’s house, I saw this magnificent pink bird flying past the house and landing on the bird feeder to start its feast.

Stuart and his wife Gillian welcomed us in their garden, where I spent half an hour photographing the gorgeous rosy starling and chatting to Stuart and Gillian. I also took some time to admire their beautiful dogs Hugo and Hobbes. These dogs were just wonderful, not every day you see dogs as well behaved as these two!

My first and, I hope, not last experience with the rosy starling was unforgettable! I am incredibly grateful to Stuart and Gillian for reaching out to me and inviting me over. You wouldn’t be reading this article about the rosy starling if not for the two of them!

If there is any particular species you’d like to read about or have a rare visitor to your garden you’d like to share with me, don’t hesitate to get in touch through my website or social media channels.