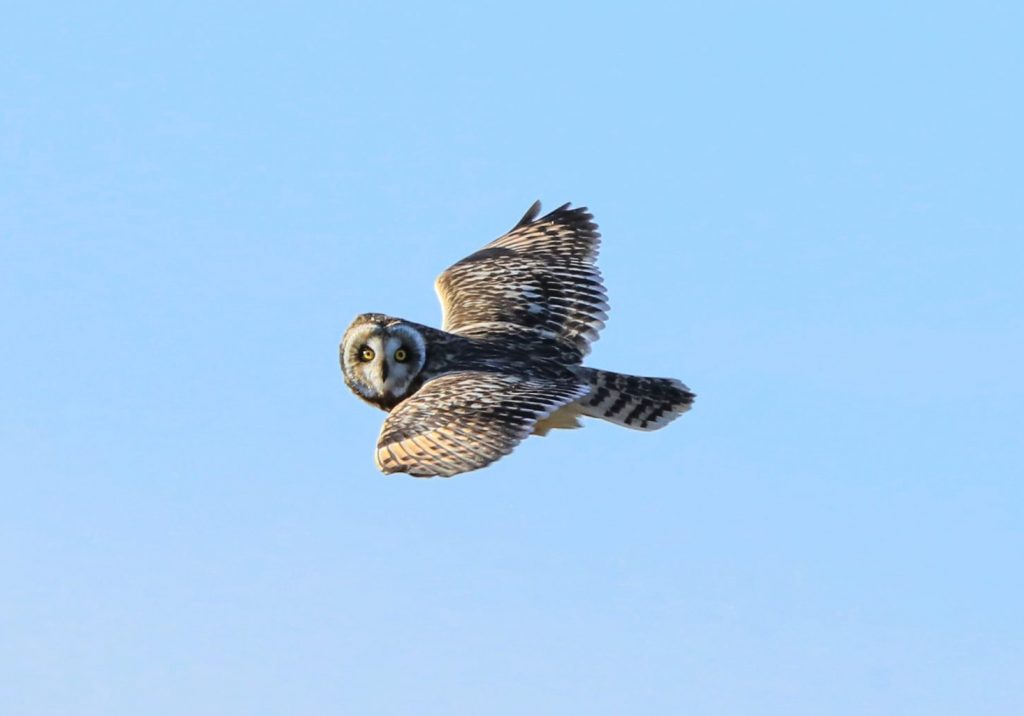 THE days have been getting shorter and duller, and most of the trees have lost their leaves; a sign to get our down jackets ready for winter. Some migrant species have already returned to their winter grounds in East Lothian; however, I am still waiting in anticipation for one of my favourite birds that occasionally winters in the area – the short-eared owl.

For many birdwatchers, the winter months provide the best opportunity to catch up with this species as the resident birds are joined by migrants. East Lothian is a particularly good place for short-eared owls as it offers the right habitat – such as lowland grazing marshes and rough grassland – that wintering ‘shorties’ need.

During summer, short-eared owls are likely to be seen in moorlands – their preferable breeding habitat. As they nest on the ground, usually in the shelter of tall grass, the breeding site must have sufficient cover to conceal the nest.

Shorties are unusual for owls because they prefer to hunt in the daytime. They can be seen hunting as they quarter an area looking for their prey. ‘Quartering flight’ is a mixture of flapping and gliding; sometimes they hover before dropping down onto the prey. It is not uncommon to see several shorties hunting over the same area. They occasionally hunt from a perch or while standing on the ground. Unlike other owls, shorties carry their prey in talons. They feed on small mammals (primarily on field voles) that comprise around 90 per cent of their diet.

Short-eared owls are ghostly as they soundlessly flit over the landscape. There is nothing more magical than watching an owl turns its head towards you whilst keeping the body still.

My adventure with them started two years ago during a visit to Aberlady. It was a sunny and windless Saturday morning when I arrived at the reserve. I hung my camera over my shoulder and rushed over the bridge. The tide was slowly coming in, so the lagoon did not host many birds. There was no one around and I was so instilled with the surrounding silence that I could hear my own thoughts.

As I walked further towards the coast, I saw a pale bird to my left. My initial thought was ‘seagull’; however, after I looked through my camera, I realised it was an owl. I could not believe my luck! I know I say this a lot, but I really am a lucky person when it comes to wildlife.

Even though the ground was covered in frost, I decided to sit down in tall grass – no matter the sacrifice, when it comes to wildlife my priority is to remain invisible to avoid any disturbance.

From my vantage point, I witnessed the owl freeze in mid-air for a split second and pounce with its head down. I must admit it looked quite comical at first. It did not catch anything the first time, so I kept watching, hoping for another attempt.

Before long, I realised the owl was joined by another shortie. Could I have asked for more?! The second owl rushed towards the first one and as it got closer it straightened its legs and scratched the first bird with its talons.

The owls were clearly manifesting some disagreement but it cooled down fairly quickly. The second bird decided to retreat and, as it flew past me, it looked straight into my camera before it finally vanished from my sight. The moment when the bird’s eyes met mine was hypnotising. I was so entranced that I needed a while before I was ready to carry on with my photography.

After this wonderful experience, I wanted to return to the reserve a week later. But on that visit I found the owls further towards the coast where it was difficult to photograph them, although I still enjoyed watching them. It just goes to show how unpredictable wildlife can be!