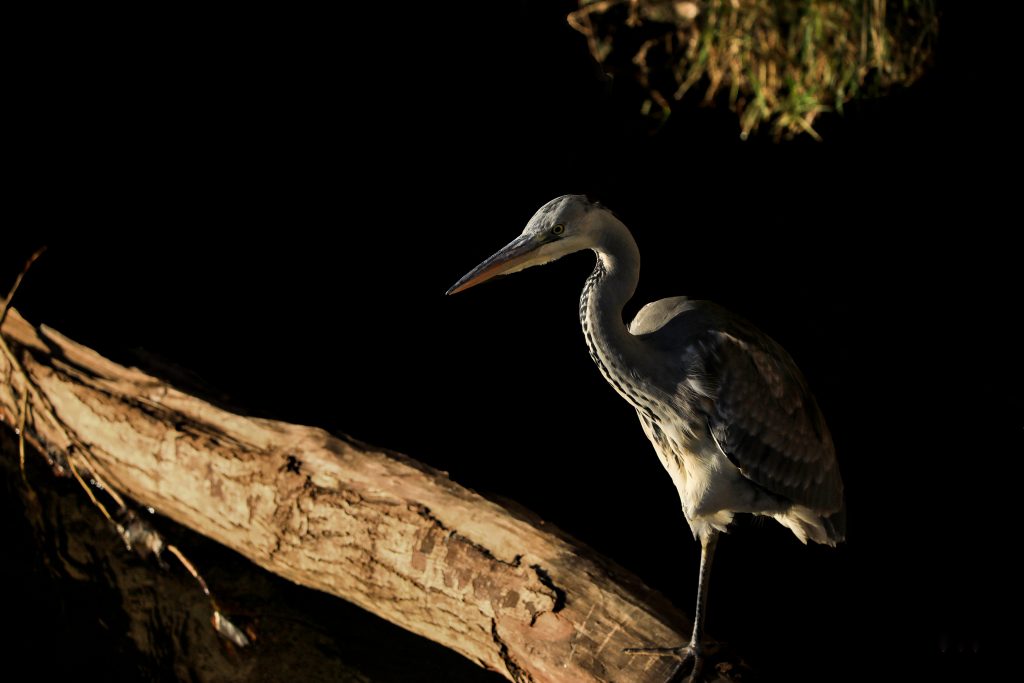 A BEAUTIFUL and glowing autumn is already here.

This time of the year is pretty special when it comes to taking atmospheric photographs: from colourful frames through misty mornings to captures of the golden light. Even a rainy day can bring opportunities for a powerful image!

Last year, my main focus was placed on a grey heron in low autumn light. I even succeeded in capturing the bird with a jumping trout that got in the frame! A month later, another unusual scene occurred…

I woke up very early and saw a beautiful, mysterious, and almost luminous mist outside the window. It was still fairly dark; however, I did not hesitate to get my camera gear together, pull some warm clothes on, and head out. As soon as I left, the mist started to settle and the sun made its appearance. The whole landscape looked magical!

As I was walking along, I spotted a heron standing underneath the bridge. The sun rays lit up the bird whilst keeping the surroundings dark – it seemed like a perfect opportunity for a portrait! I rushed towards the bridge and quickly walked along it. Initially, I struggled to find the right position for a photograph! The walls on the bridge were quite tall so there was no chance that I could bend over them to capture the bird. If you have seen me, you will know that I am not a big person! I decided to take a chance on walking back across and trying to capture it from ground level. My aim was to stay quiet and invisible so I wouldn’t startle the heron.

As soon as I came down, I lay down on the ground near the bottom of the stairs, so the bird couldn’t see me. I stretched myself as best as I could and positioned the camera in front of me. I managed to squeeze the lens through a small gap which I found between the stairs and the ground, and I fired a few shots. I couldn’t see the subject so it was purely intuitive shooting, but the results gave me an idea on how I should hold the camera. I repeated the series of a few images and once again checked the results. This time they were more than satisfying – I managed to get a portrait of a grey heron backlit by the golden light of a rising sun.

The grey heron – weighing up to two kilograms – is a prehistoric-looking creature and the largest European heron. With its prominent long white neck, orange pointed beak, and grey and white feathering, it is also one of the UK’s most recognisable bird species.

These tall birds spend most of their time alone feeding mainly on fish but can also take a small bird or a vole. Last summer, I witnessed a heron attacking a duckling at the Esk! Even though I know this is nature and we should never interfere, I must admit that it was difficult for me to watch. Occasionally, herons visit gardens with ponds to feast on an easy snack.

Herons have incredibly long legs and toes that enable them to stand and wade in water up to half a meter deep. The long neck gives them reach as they look for prey. Initially, they stand with their neck stretched out scanning the area but as soon as they spot a movement, they will hunch down and bend their neck over their chest in preparation for hunting. They move slowly and gracefully, which makes them a great and relaxing subject to watch.

A heron’s eyes are set wide apart. They can be directed forwards and work as binocular vision, or downwards to skim the area, simultaneously ahead of and below the beak, whilst keeping the head motionless. Herons prefer to swallow their prey head-first – if you are lucky, you may see them flicking their prey up in the air in order to position it right before consuming.

Make sure you look out for these incredible birds in flight! Their long neck retracted in an ‘S’ shape and slow-flapping wings, as well as long legs held out behind, make them difficult to miss!