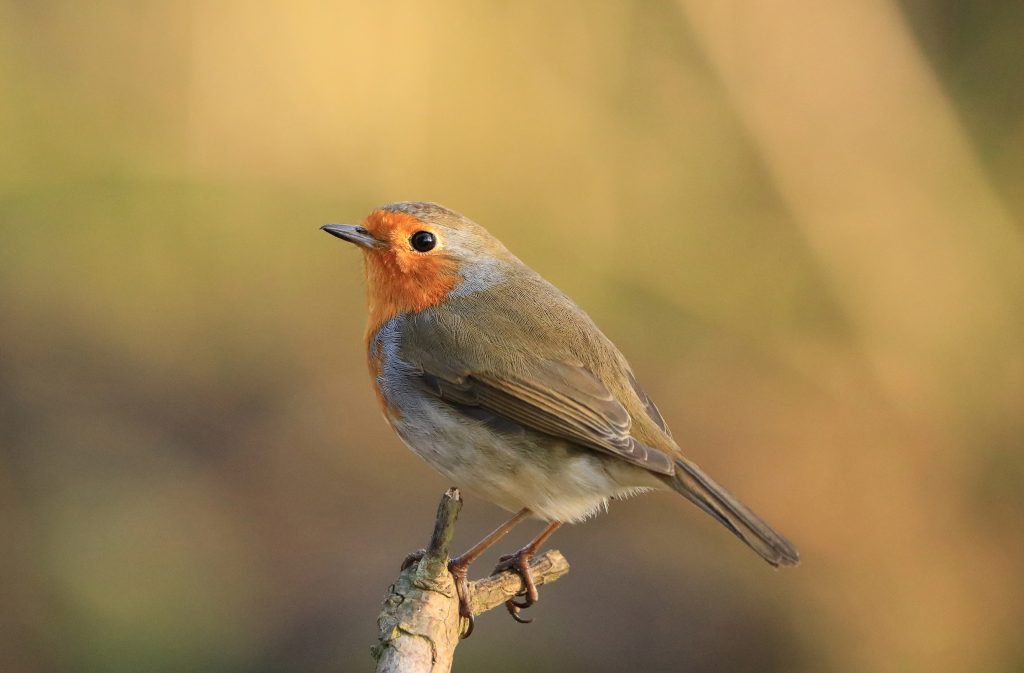 Spring in East Lothian has finally kicked off!

For us people, it means enjoyable sunshine and longer days; for nature, this is the time everything bursts into life: leaves are unfolding, flowers are blooming, mammals are emerging from their winter sleep, butterflies are appearing on the meadows and birds are arriving at the nest boxes, filling our gardens with their song.

Spring is a special time for all the animals who now work at full capacity to find a perfect partner, birth new life and raise their offspring. This flurry of activity is a dream for a wildlife photographer like myself, as the photo opportunities are boundless.

I’ve been out with my camera almost every day for my government-sanctioned exercise. I cannot wait to tell you about my happy encounter with an otter on the Esk – that’s right, an otter!

However, for my first article I decided to go for a popular all-time favourite – the robin. This cheeky wee bird has a special meaning to me and I believe this story will make a greater start to my monthly Wildlife Diary.

I arrived in Scotland five years ago for a holiday and immediately fell in love. It was not long before I decided to stay here for good and turn over a new leaf in the process. The beginnings were difficult. The move had been quite spontaneous and during the Fringe when the country is busy. I had been offered a job; however, I struggled to find a place to stay. There were times when I wanted to pack everything and give up.

One day, as I was contemplating in a local park, I heard a beautiful and blissful birdsong that drew my attention. My negative thoughts began to fade away as I closed my eyes and enjoyed the soothing symphony. The music ended and I opened my eyes to see a beautiful but plump bird standing in front of me. I found its prominent red breast endearing.

As it was my first encounter with a robin (who are not as common in industrial Polish cities as they are here); I reached out for the quite basic camera I had at that time and took a few photographs. The bird seemed to be posing, glorious in the bright sunshine. It did not fly off as I expected. It started flitting from branch to branch, thereby coming closer to me.

I was so entranced. It was late before I realised that I had spent the whole of my afternoon in the same park, on the same bench, watching the same bird. It was the first time since my arrival I had felt strong and positive. That chubby, red-breasted bird gave me a glimmer of hope for a better tomorrow and contributed to the start of my journey into wildlife photography.

The robin is such a common bird in the UK that everyone is likely to learn about it as a child. It is, in fact, one of Britain’s favourite birds as proven in the National Bird Vote each year.

Despite the robin’s apparently friendly and cheerful behaviour towards people, the robin is an extremely aggressive and territorial bird that actively drives intruders away – even those larger than itself!

Their kenspeckle bright red colour helps with territory defence and is especially utilised during the breeding season. The birds will show off their breast whilst they sing at each other. Sometimes they flit onto higher perches to display their colours more effectively.

The robin is a year-round resident in the UK. You can see it in a variety of habitats across East Lothian; from hedgerow to garden, and meadow to wood. Once you begin to recognise a robin’s song you won’t ever mistake it for another bird.

One interesting fact about robins is that its vocalisation differs throughout the year – the songs will sound more melancholic over the winter and become chirpier in spring. The average lifespan of the robin is 13 months, so it is unlikely that the same robin visits your garden year after year. Due to their high mortality rate in the first year and aggressive nature, only one in four birds reach their first birthday.

Each month I will share a story with you about a chosen species from within East Lothian.

If you have a favourite animal you would like to read about or gain knowledge of, contact me through my website or social media channels. Speak to you next month!